In the wake of extreme buyer demand and mind-blowing bidding wars, housing prices soared in Seattle and reached staggering heights on the Eastside. Record low-interest rates were the silver lining for those buyers who were able to successfully purchase a home with financing.
2022 looks to be another strong year for real estate. Windermere’s chief economist, Matthew Gardner, predicts that interest rates will remain low and home price growth will continue—albeit at a slower, more sustainable rate than we saw in 2021. He also foresees a nice bounce-back for our COVID-impacted economy in Q4 of 2022.

The Seattle real estate market, while extremely active in its own right, was far more moderate than the Eastside’s frenzied and nearly unattainable environment.
Seattle’s Median Sale Price increased by 9% to $852,000 (up from $785,000 in 2020). Neighborhoods in Lake Forest Park-Kenmore (+24%) and Shoreline (+16%) outperformed the average, while Queen Anne-Magnolia (+4%) and West Seattle (+7%) lagged behind.
Despite the tight supply of homes for sale, there was a 20% increase in the number of Seattle homes sold in 2021 (11,589) compared to 9,682 sold in 2020. Central Seattle (+31%) and Queen Anne-Magnolia (+22%) had the largest increases in the number of homes sold.79% of all Seattle homes, and 24% of those priced above $1 million, sold at or above the list price.
Homes that sold in their first ten days on the market went for an average of 7% above list price, compared to 4% over if we look at the overall average. The most competitive neighborhoods were North Seattle and Lake Forest Park, with first-ten-day sales averaging 10% above list price. 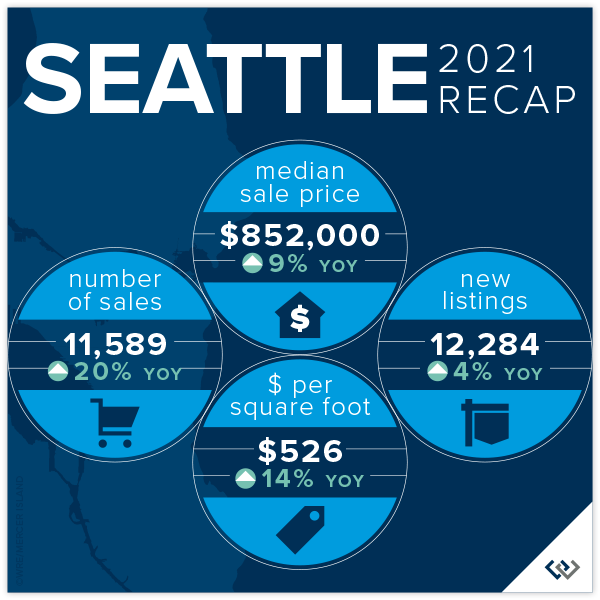 To say the 2021 Eastside real estate market was aggressive would be the understatement of the year. Typical home buyers requiring loans to finance their purchases found it nearly impossible to compete with the many cash or cash equivalent, no contingency offers that often won out. With few exceptions, homebuyers had to be willing to sacrifice rights and fail-safes—such as inspection contingencies—that are normally taken for granted in a balanced market.
The Eastside’s Median Sale Price was $1,350,000 in 2021, up an unprecedented 32% over 2020 ($1,020,000) as desperately competing buyers drove prices to record levels. Redmond (+38%) and South Eastside (+36%) saw the largest gains, while West Bellevue (+25%) had the lowest—albeit still staggering—year-over-year increase.
89% of all Eastside homes, and 66% of homes priced above one million dollars, sold for at or above their list price. With fewer than 0.3 Months of Inventory (the number of months it would take to sell all homes currently for sale), the entire Eastside market remained ultra-competitive throughout the year. Many Eastside communities have had only a handful of homes for sale at any one time.
Homes sold an average of 7% above the list price. For those sold within the first ten days, however, that number spiked to an average of 11% above list price. The most competitive neighborhoods were East Bellevue and South Eastside, with first—ten-day sales averaging 14% and 13% above list price, respectively. 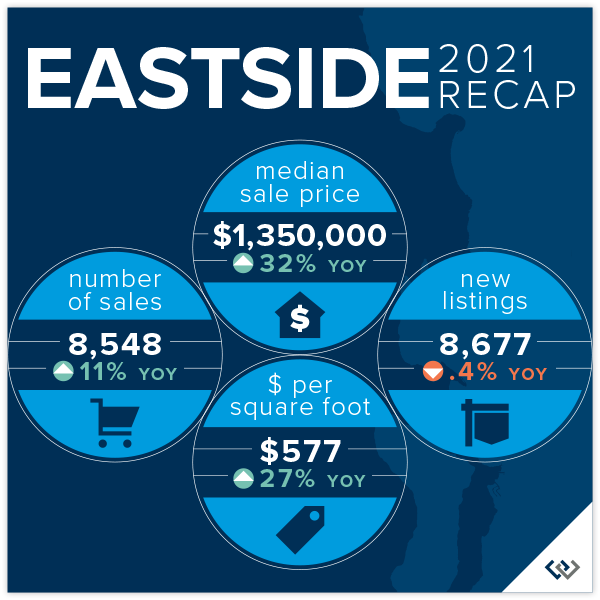 Fewer than two dozen homes for sale on the Island at any given time in 2021 led to a continued ultra-competitive market. Waterfront, in particular, saw very steep increases during the year as the laws of supply and demand deftly governed prices.
Echoing the extreme price increases seen throughout the Eastside, Mercer Island’s Median Sale Price shot up by a staggering 29% over the last year. It’s worth noting, however, that this number was skewed upward by the unusually high number of luxury waterfront sales.
In 2021, 82% of all homes sold at or above their listed price. Those sold in the first 10 days on market closed for an average of 10% above their list price. On the other hand, homes on the market for 11-30 days sold for an average of 2% below their list price list, and homes on the market longer than 30 days sold for an average of 6% below their list price.

There were 170 privately-owned waterfront home sales in the greater Seattle-Eastside region in 2021 (Eastside 59; Seattle 48; Lake Sammamish 36; Mercer Island 27).
The waterfront home market continues to see incredible buyer demand coupled with an extreme shortage of available waterfront homes for sale. As an indicator of demand in the luxury segment, most homes sold near to or above their list price with few outliers—something that historically has rarely happened in this sector.
This brief overview of the entire Seattle-Eastside private waterfront market, including Mercer Island and Lake Sammamish, illustrates the trends occurring in our region over time. This data is interesting and insightful but cannot replace an in-depth waterfront analysis provided by a savvy broker with years of local waterfront experience.
View Full Report

Should You Remodel or Sell Your Home As Is?

Our mission is to provide our clients with an exceptional real estate experience, exceeding expectations at every step and providing a personal and customized approach toward helping our clients achieve their real estate goals.